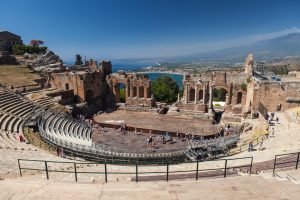 Sicily area The Sicily region: wherever you turn you will see evidence of Sicily’s 3,000 years of history as the strategic crossroads of Europe. Nowhere else have Phoenicians, Greeks, Romans, Arabs, Normans, French, Germans, Spanish, Italians, and even the British, left such an enormous collective legacy. The island is a vast open-air museum, a testament to nearly every Mediterranean civilization of the past. 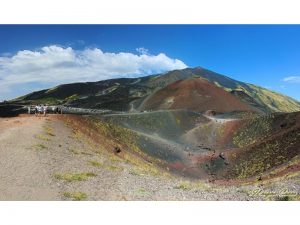 There is always something to do, whether it be lounging on golden beaches, hiking in the mountains, visiting ancient archaeological sites, skiing on Mount Etna or shopping in Palermo’s fashionable boutiques.
Sicily does not only offer summer, sun and lovely beaches but also many cultural highlights. 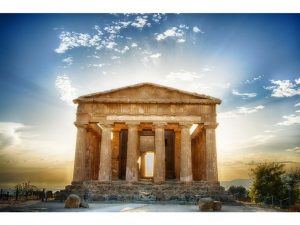 A compulsory point on each itinerary for a Sicily vacation are the countless testimonies of past times that a spread out across the island. Some examples include the world famous „Valley of the Temples“ in Agrigento with the structures more than 2,500 years old and are testament of Greek settlement on this island during the ancient times. Besides this also well preserved remains of antique structures can be visited in Syracuse and Catania which are equally appealing.

Those who need to cool down after these historical adventures will find many places to do so along the more than 1,000 kilometers of coastline. In the north and east you will mainly find steep cliffs and rocks towering above the sea with a number of picturesque bays lying in-between them. The south western part is flatter and characterized by beautiful beach strips. Sicily has though much more to offer than just temples and beaches.

Explore some of the interesting smaller and larger towns such as Palermo, Messina, Ragusa, Trapani or Taormina. Alternatively go on a boat tour that will take you to the Aeolian Islands and Egadian Islands.

No description. Please update your profile.

Create a website and earn with Altervista - Disclaimer - Report Abuse